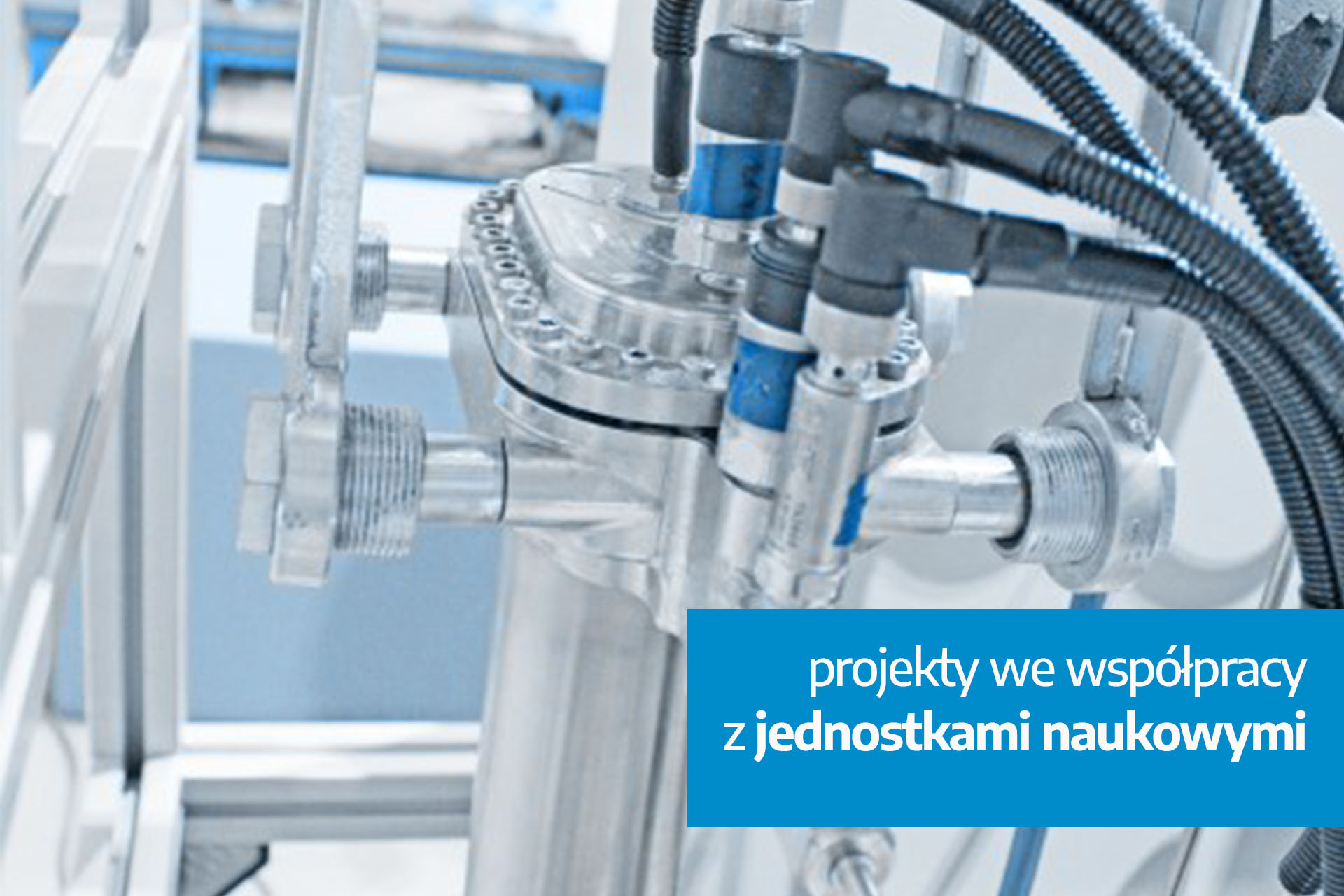 Recently, our Company, among other activities, has carried out the following projects:

The main purpose of these devices is to remove heat from electronic control elements in a controlled manner, using liquid CO2 at temperature of e.g. -40 0C, which flowing through nanotubes placed in electronic systems, receives the generated heat. Liquid CO2 absorbes heat and returns as steam to the monoblock through a conduit (transfer line), and then is directed to the exchanger, where it is condensed by R407 agent. In liquid form, sucked in by the pump, it is forced back into the system through a monoblock (connection box) for cooling the electronics. Due to the fact that CO2 is in liquid form, it is a closed circuit system.

The system uses throttle valves made of 1.4404 austenitic steel that were developed in our company. The valves are used to control the flow of liquid CO2 at temperatures up to -600°C.

"Marta" is a device that enables the dissipation of a thermal power of 400 W using liquid CO2 and which will become an almost serial product used by scientific institutes.

The first presentation of the Marta during the conference in Bonn was welcomed with great interest of many European scientific institutes dealing with research on particle breakdown.

The second device implemented for CERN is the so-called Baby Demo with a heat output of 9200 W, which is currently in the design phase.

1.4404 austenitic steel was used to build the components of the "Monoblock", "Conection Box", "Local Box" and piping components.

Production and design cooperation with CERN resulted in new products and technologies that will be used for subsequent projects for this institute.

The aim of the project was to design, perform FEM and CFD calculations, prepare documentation and produce a prototype of special high-pressure nozzles.

The first tests of the prototype took place at the CBR in Łaziska Górne. Later, the tests were carried out at the Experimental Mine "Barbara", on a specially designed dolomite and anhydrite rock blocks.

Blocks were obtained from a copper mine.

Research in cooperation with GIG Scientists set out further directions of R&D work in the field of drilling and mining of rocks and coal. 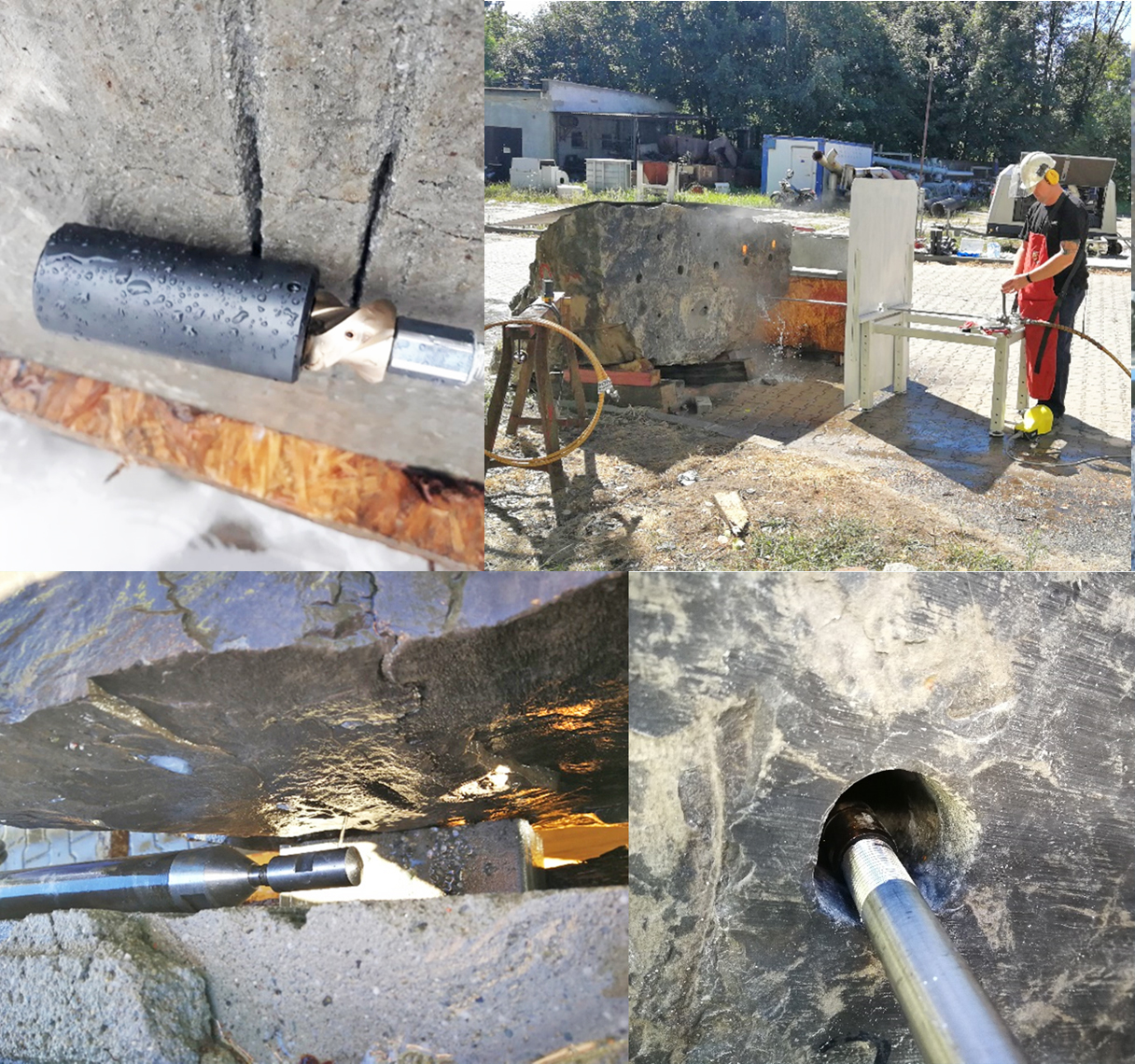 The Research and Development Center conducts advanced research on coal mining technology using water under high pressure Our company participates in the HydroCoal Plus project, which involves the development and demonstration of hydro-hole technology to improve the competitiveness of brown coal exploitation in the world and reduce its impact on the environment.

Several tests (carried out from August to October) at the PONAR Wadowice Plant in Łaziska Górne allowed determining optimal parameters of flow rate, water pressure, nozzle shape and its distance from the mined coal block.

Most tests were performed using a remote-controlled Aquacutter robot, which enabled precise and, above all, safe mining of coal for the operator using a high-pressure liquid stream. The robot is used for hydrodynamic forging of concrete on a daily basis, but for the duration of the project it was equipped with a specialized manipulator that enabled the implementation of this research project.

At the end of 2019, the third stage of research took place, which involved the development and demonstration of hydro-hole technology to improve the competitiveness of brown coal exploitation in the world and reduce its impact on the environment.

The engineers of the Research and Development Center and the High Pressure Department of PONAR Wadowice and the researchers of the Central Mining Institute conducted tests in real conditions at the brown coal mine in Bełchatów.

Tests were carried out using the Aquacutter remote-controlled robot.

By using the following parameters, we achieved a hydro cutting range of up to 5 m:

Please feel welocme to watch the film that was made during research work at KWB Bełchatów.